Is Coffee Bad for You? 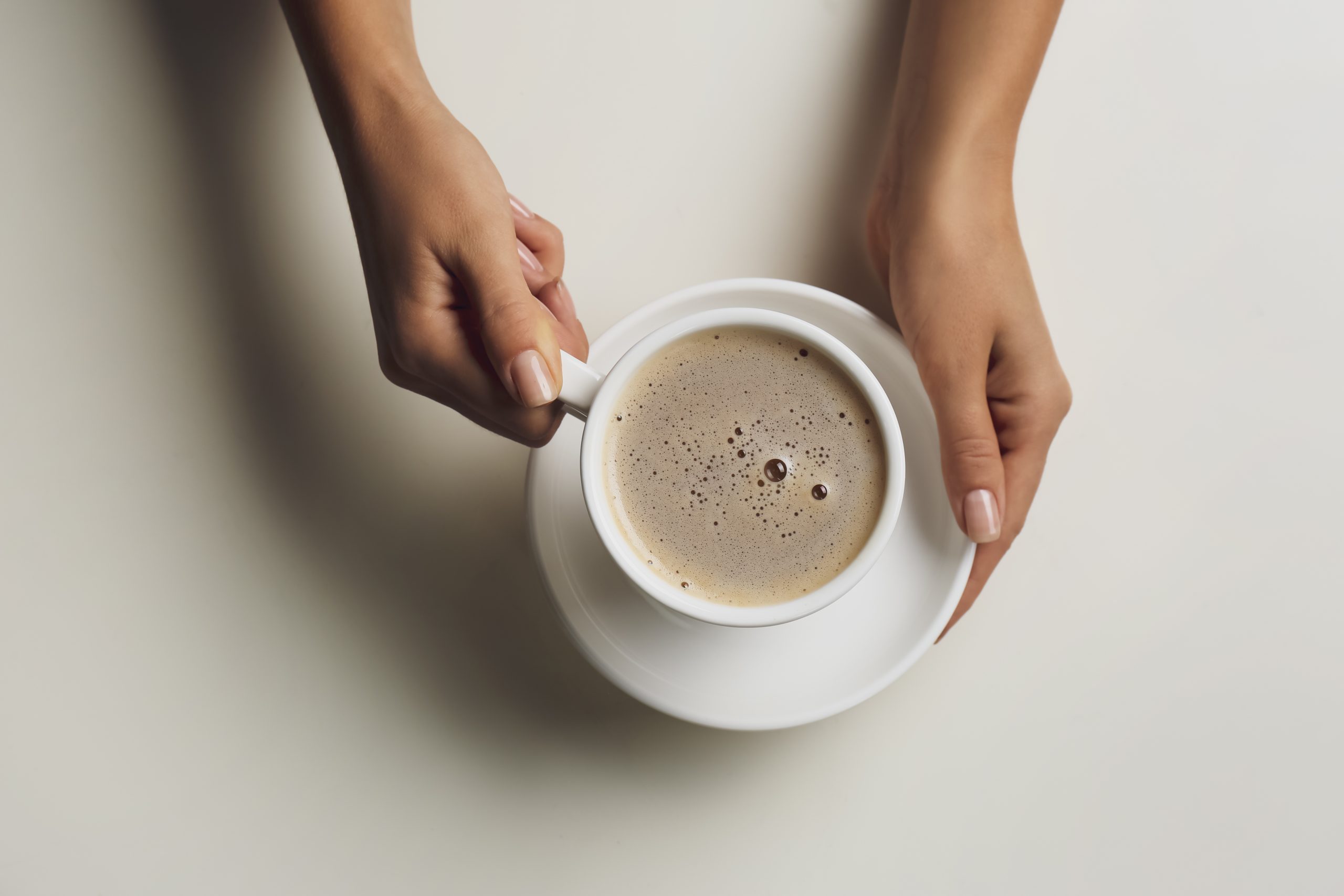 Hello coffee lovers! For sure, you already know that coffee has benefits to your health.

But, are you aware of the risk of consuming more caffeine? How much is enough and what should be the reasonable amounts of coffee one should take?

These are the questions people asked us about the side effects of drinking coffee.

In all aspects of our life, anything that done too much is always has a negative effect.

Other coffee lovers drink more than one cup a day as part of their coffee habit.

In this blog, we will give the importance of how many cups of coffee should you drink a day. And the impact of too much coffee on your health.

We will answer the question, is coffee bad for you? 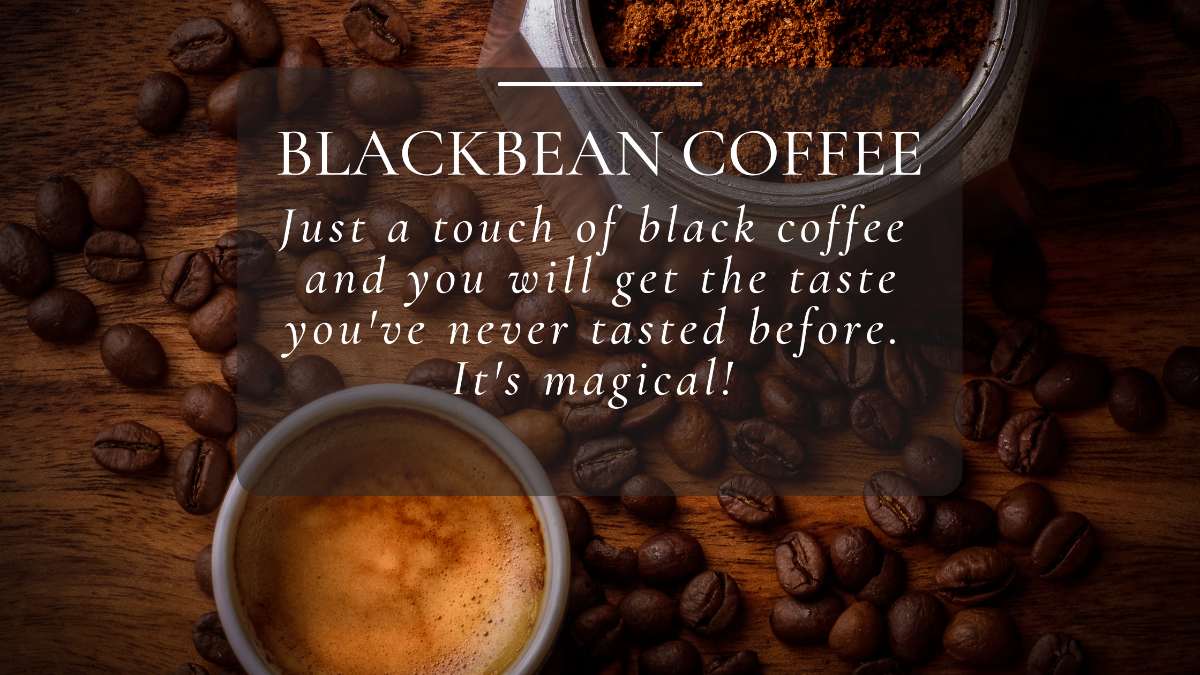 What’s in the Article?

What Is the Effect of Coffee?

Caffeine is a bitter substance usually a product of coffee beans and tea leaves. And other caffeinated beverages.

Drinking caffeinated coffee has a variety of health benefits. On the metabolism of your body. Here are some of the effects of coffee on our bodies: 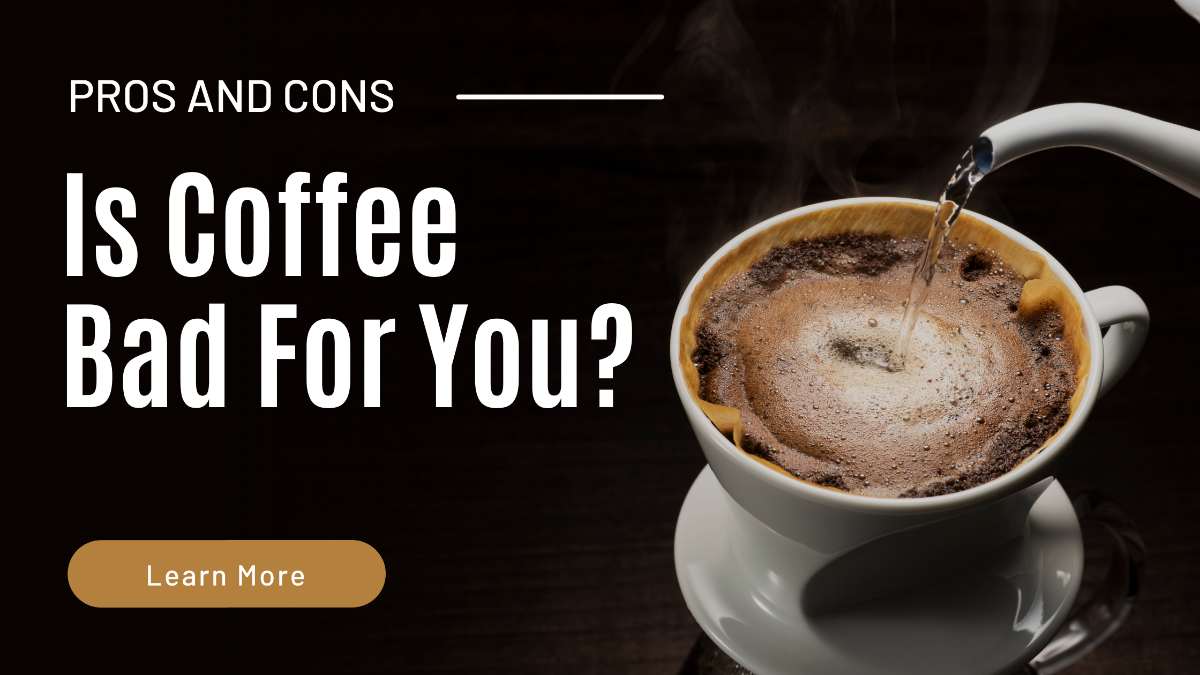 How Long Does Caffeine Stay?

Caffeine’s half-life is three to six hours, depending on how much you drink.

Thus, suppose you had an 8 oz morning coffee you’d have 48 mg of caffeine remaining by midday.

And as long as you have caffeine in your bloodstream, you may feel the benefits. 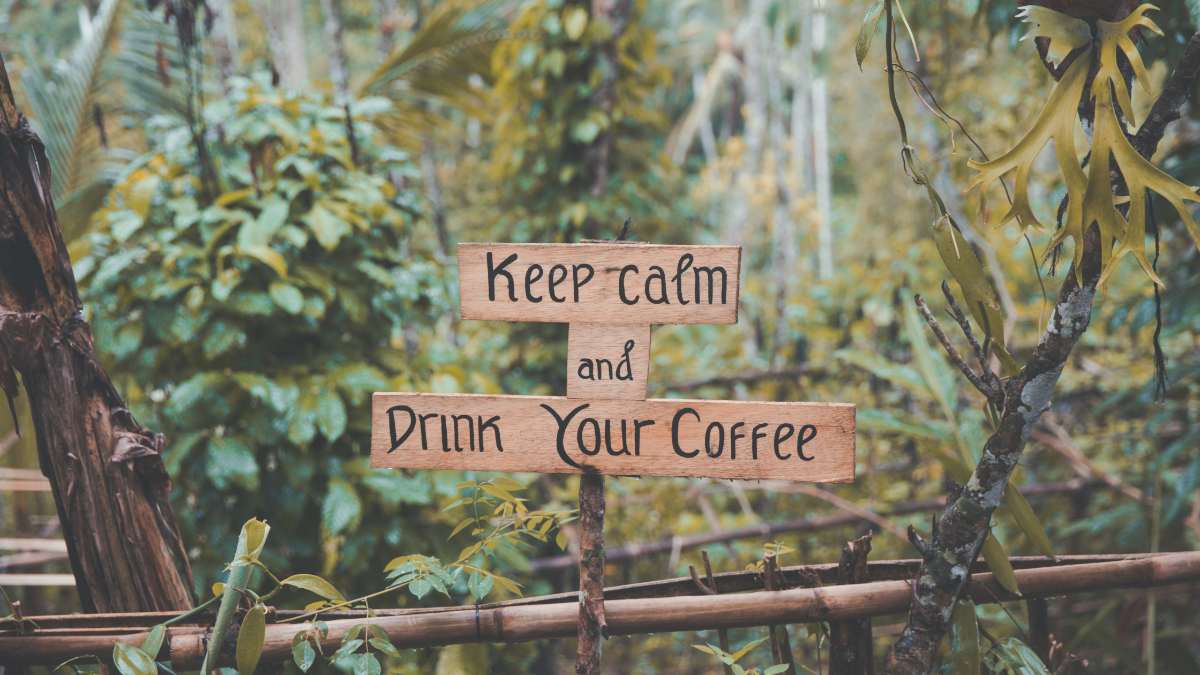 Having said all the preliminaries. Let’s try to look at the most significant health benefits of coffee :

A study conducted by Johns Hopkins University shows that coffee drinking is less likely to die.

Some sickness like coronary heart disease, stroke, and diabetes.

And renal disease, and liver cancer according to the findings.

Cardiovascular disease occurs when the heart becomes weak. It has trouble pumping enough blood to the body’s organs.

You can drink coffee at least one to two cups a day which helps to prevent a lower risk of cardiovascular disease.

People who consume more coffee have a lower risk of developing type 2 diabetes.

Because it decreases insulin sensitivity and lowers glucose tolerance. 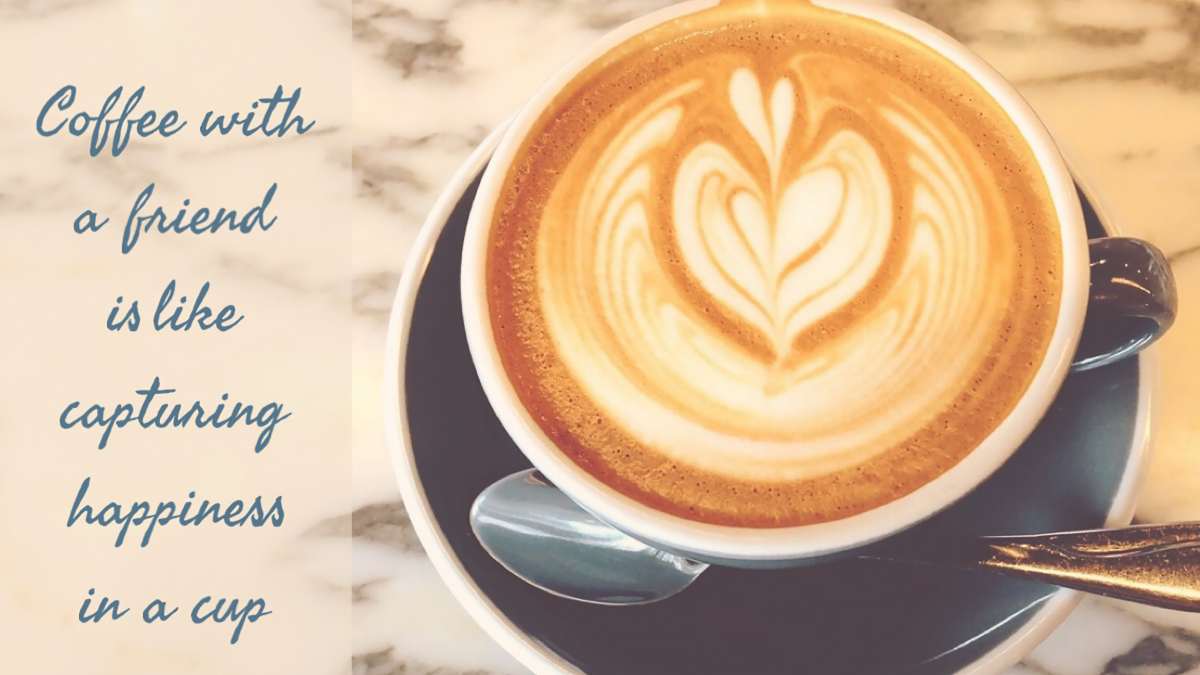 Hypoxia pushes the brain cells into panic mode. Like what we find in neurodegenerative illnesses like Alzheimer’s disease.

It induces the production of a substance called adenosine.

Which in turn produces a chain of events of enzymes leading to inflammation.

Caffeine interferes with this by limiting the cells’ capacity to identify adenosine.

The low risk of having a stroke

Drinking at least one cup of coffee per day connects with a decreased risk of stroke.

There seems to be a lot of evidence that coffee drinking and stroke are associated. In other words, more coffee means less chance of stroke.

It can help you lose weight

Caffeine stimulates the production of lipase. Enzyme that assists in fat digestion.

It is the synergetic mix of caffeine and chlorogenic acid working together.

That makes coffee such an effective fat-burning method of burning calories.

That helps you in maintaining a healthy weight.

Coffee includes magnesium and potassium. Which aids in the use of insulin by the human body. Controlling blood sugar levels and decreasing your desire for unhealthy treats and indulgences.

Coffee helps in improve your attention

Caffeine may aid in improved mental alertness allowing you to get and keep new knowledge.

This may be beneficial during a long study session.

Since it allows you to recall more information in a shorter amount of time.

A cup of coffee and other drinks that have caffeine all day seems to make you more alert and clear-headed. Caffeine can also help you stay awake after not getting enough sleep.

An energy drink that has caffeine and glucose in it seems to help.

It has a calming effect.

Coffee, the golden child of beverages, might help you feel less down in the dumps.

For a variety of reasons. Including the fact that caffeine stimulates your body to boost. The amount of dopamine that sent to your brain. which in turn makes you feel joyful.

It is possible that this anxiousness may lead to decreased productivity. In everyday tasks such as preparing for a test or performing at work.

The most straightforward strategy to address the low performance. It arises from increasing worry to reduce or remove the source of the anxiety.

Caffeine is the most used psychoactive substance in the world. When it comes to increasing productivity.

The potential of caffeine to boost focus. According to the majority of individuals, this would explain the rise in performance. 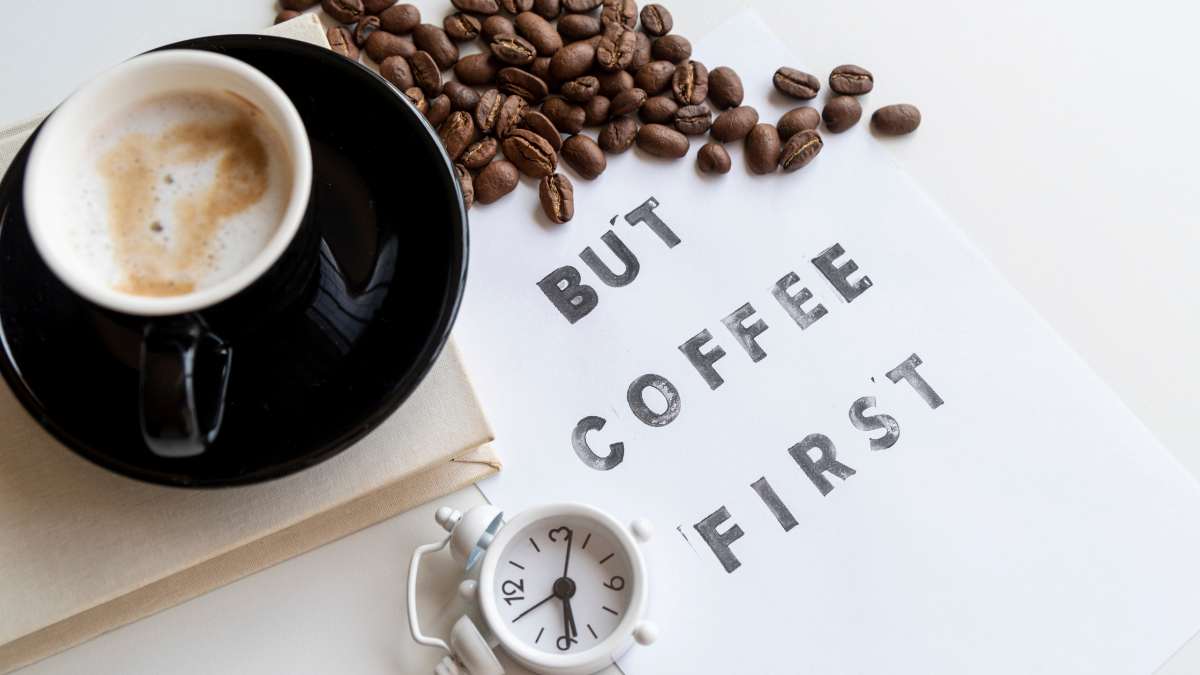 It works by blocking the effects of adenosine, a brain chemical that makes you feel tired, so you don’t get tired.

Which can make people feel anxious or nervous, especially with black coffee.

Most people get nervous, jittery, and other symptoms when they eat a lot of coffee every day.

But people who are sensitive to coffee may get the same effects even if they eat a small amount.

Also, small doses make people breathe and raise their stress levels when they take in one sitting.

This suggests that the compound may have the same effect on stress levels no matter how often you drink it.

But unless you start noticing that you get nervous or jittery a lot. You might want to cut back on your caffeine intake and see if that helps.

Tip: Caffeine may boost alertness in low-to-moderate quantities. While higher dosages might cause anxiety. Keep an eye on your own reaction to see how much you can handle. You can change your regular coffee drink. 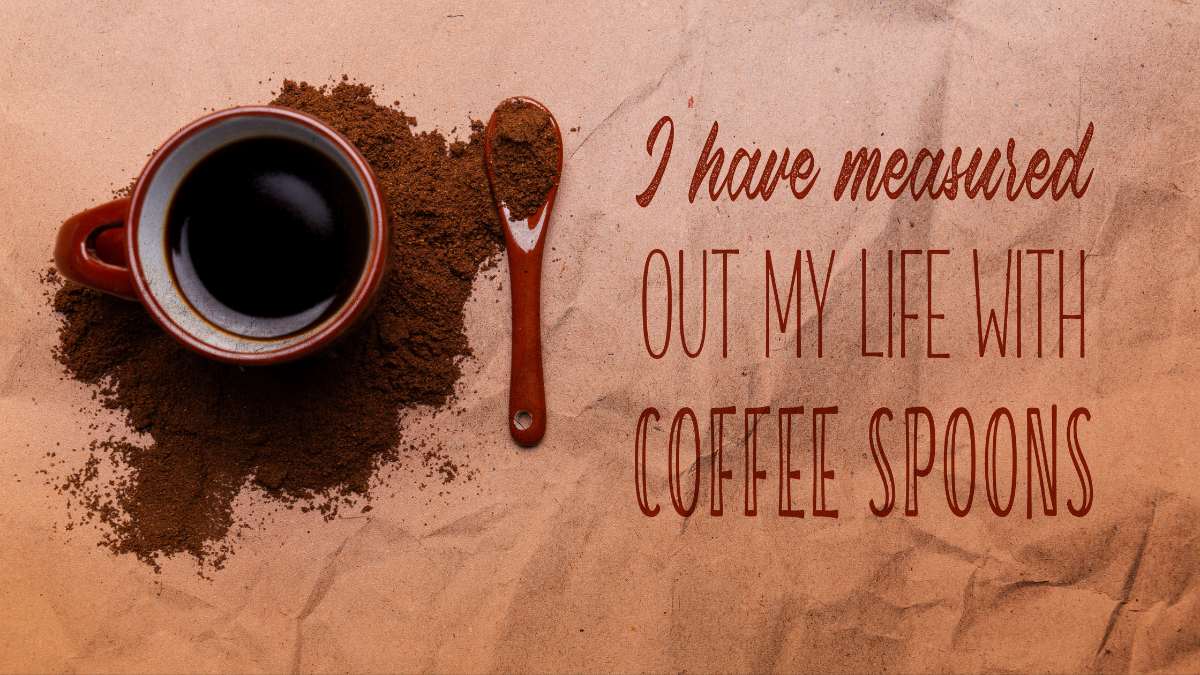 One of caffeine’s most admired features. Its ability to keep people alert while working. Excessive coffee consumption may interfere with sleep.

Caffeine use tends to extend the time. It takes 30 minutes to fall asleep.

It may also reduce sleep time, especially in the elderly.

You may not be aware that your excessive consumption is disrupting your sleep. Late-day coffee consumption may disrupt sleep. Caffeine’s effects might continue for hours. Caffeine lingers in your system for 5 hours.

Depending on the individual, the time might range from 1.5 to 9 hours. 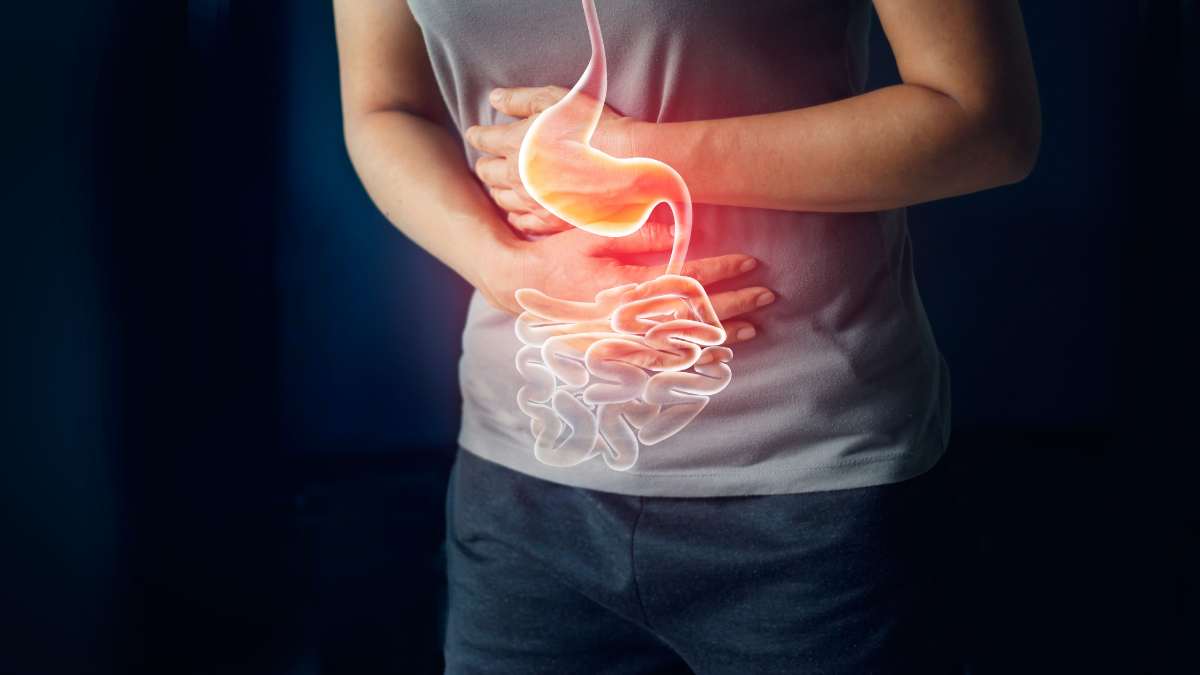 Problems with the gastrointestinal system

Many individuals find that a cup of coffee in the morning helps them move their bowels.

The release of gastrin, a hormone produced by the stomach that speeds up the action of the colon. Additionally, decaffeinated coffee has been shown to have a similar effect.

Caffeine seems to increase bowel movements. By enhancing the contractions that transport food through the digestive system.

If you’re having problems with your digestion, you may want to reduce your coffee intake or switch to tea.

Tip: Larger doses of coffee may cause a bowel movement. Even while small to moderate quantities help enhance gastrointestinal motility. It may be helpful to cut down on coffee or change to organic coffee 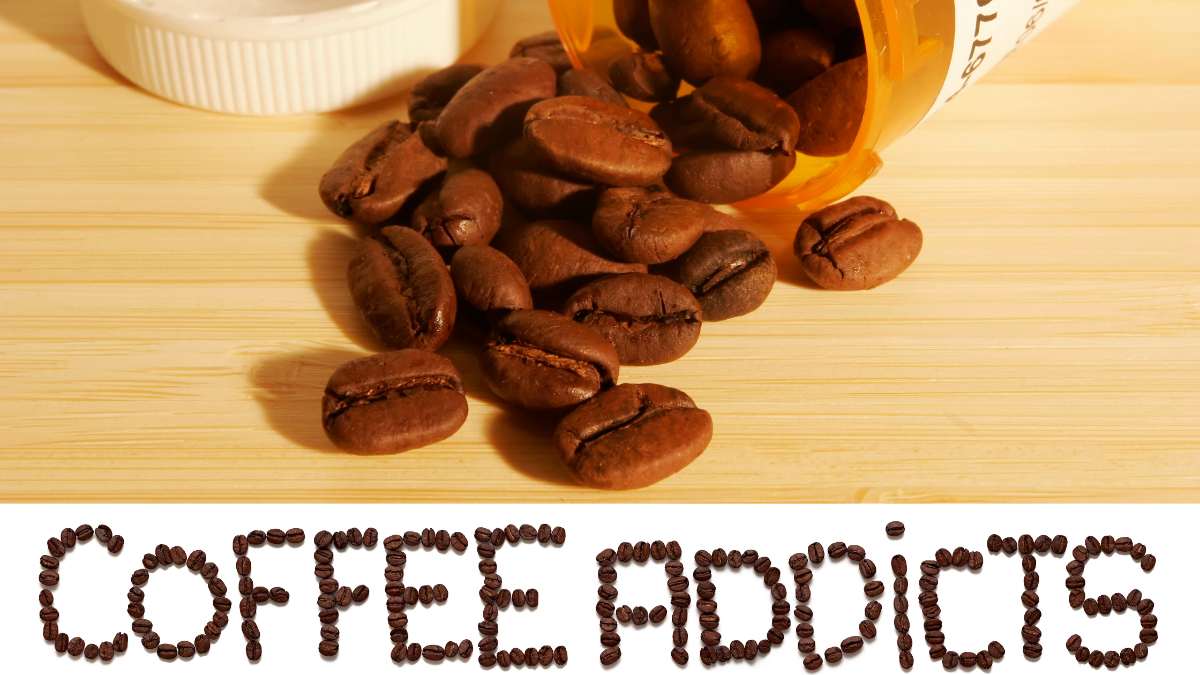 But, particularly at high doses, it may cause psychological or physical dependence.

Caffeine consumption frequency also seems to have a role in reliance.

Even while the molecule doesn’t seem to create actual addiction. If you consume a lot of coffee or other caffeinated drinks on a daily basis. You’re likely to get addicted to its effects.

Tip: Change the kind of coffee you create. 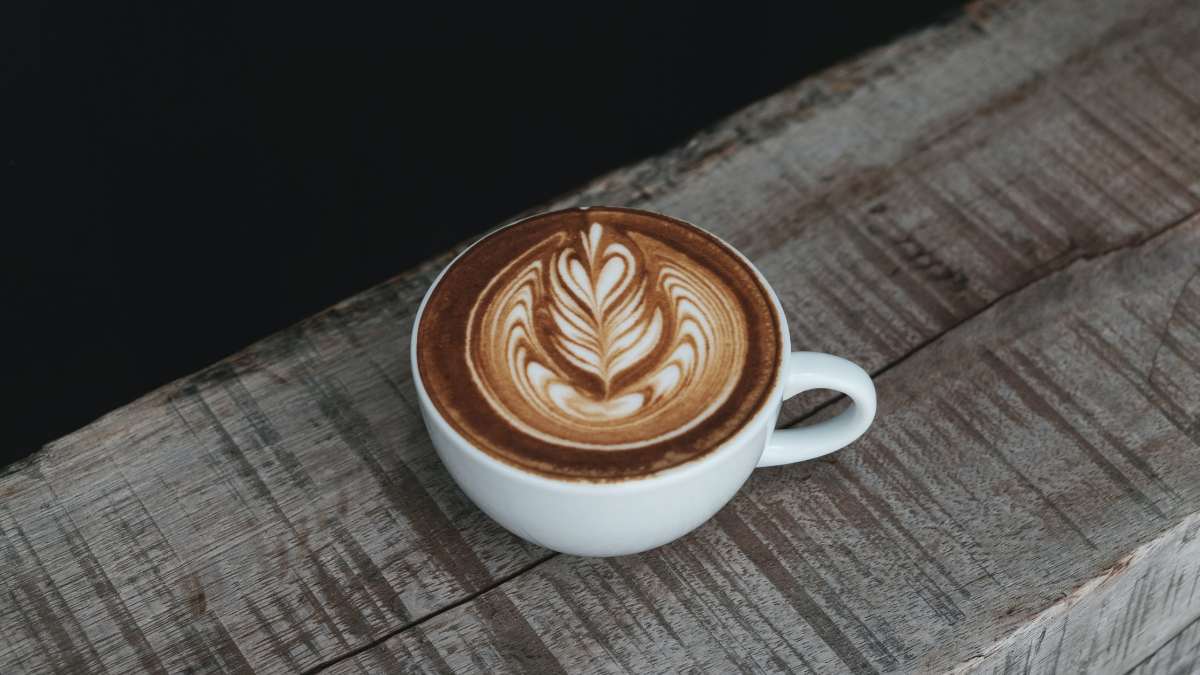 How many cups of coffee a day?

When used at levels of up to 400 mg daily, caffeine expects to be safe for the majority of healthy persons. This is about equal to 4 cups of coffee.

Visit our reviews about a coffee maker for 4 cups.

Caffeine may be harmful if used over an extended period of time or at dosages of more than 400 mg daily. 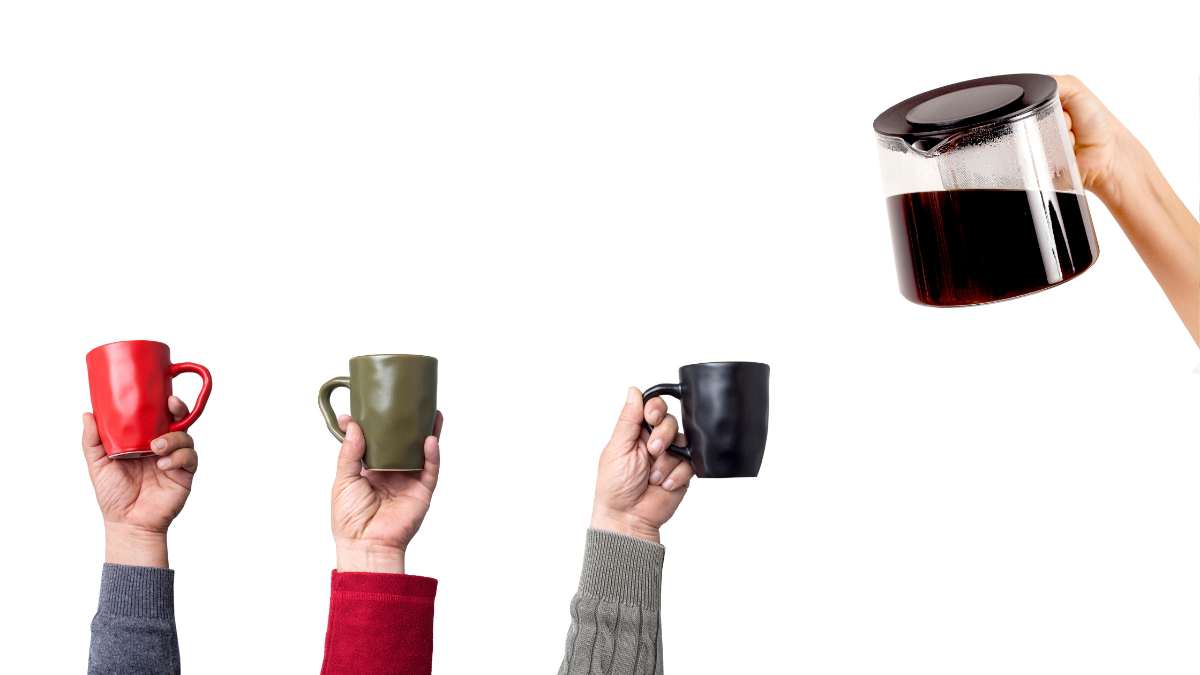 Caffeine may induce a variety of negative effects. Including sleeplessness, anxiousness, restlessness, nausea, and an elevated heart rate, among others.

More potent dosages may induce side effects. Such as headaches, anxiety, and chest pains.

When caffeine is at high levels, it is likely to be harmful.

It has the potential to induce irregular heartbeats and even death in certain cases. 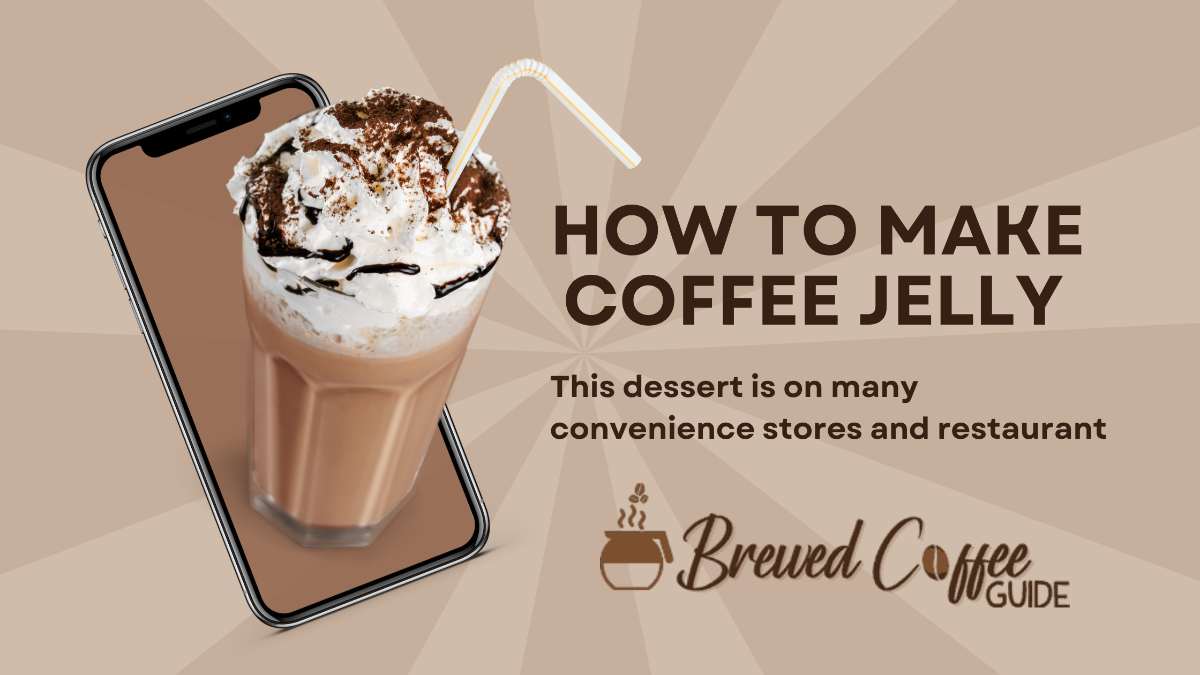 Who should restrict their use of caffeine?

When consumed in proportions that are typical in meals. Coffee may safe during pregnancy and breastfeeding.

Caffeine use of up to 300 mg per day seems to be safe in moderation or one cup a day. This is about the same amount as three cups of coffee.

Coffee may raise the likelihood of miscarriage and other complications during pregnancy.

Breast-fed babies who consume a lot of caffeine while breastfeeding. May have sleeping issues, irritability, and increased bowel movement.

This is a question for which there is no definitive answer.

The caffeine content of coffee is the most significant concern when it comes to children consuming it.

The caffeine content of coffee is the most significant concern when it comes to children.

Given its stimulant nature. Caffeine may become addictive at any age if a person begins to use it in large quantities.

Remember that children should control their caffeine consumption. It may have some negative effects on their bodies.

Excessive caffeine may exacerbate this disease. If you have bipolar disorder, you should use caffeine with caution and in small doses.

The use of caffeine may increase the symptoms of bleeding problems.

Caffeine raises the pressure within the eye, which may lead to glaucoma. Following consuming caffeinated drinks. The rise begins within 30 minutes and lasts for at least 90 minutes after consumption.

This only happens if you have existing hypertension. But, among persons who use caffeine on a daily basis, this does not seem to be a big source of worry.

You can drink organic coffee at low consumption a day.

Caffeine may impair bladder control. By increasing the frequency with which one urinates as well as the desire to pee.

Caffeine, particularly when consumed in excessive quantities. May aggravate diarrhea in those suffering from Irritable bowel syndrome.

Caffeine may increase the amount of calcium in the urine, which can cause weak bones.

If you have osteoporosis or poor bone density. You should restrict your caffeine intake to no more than 300 mg per day 2-3 cups of coffee.

When caffeine and creatine take together. It is possible that Parkinson’s disease may deteriorate more.

Caffeine should take with care if you have Parkinson’s disease and taking creatine. 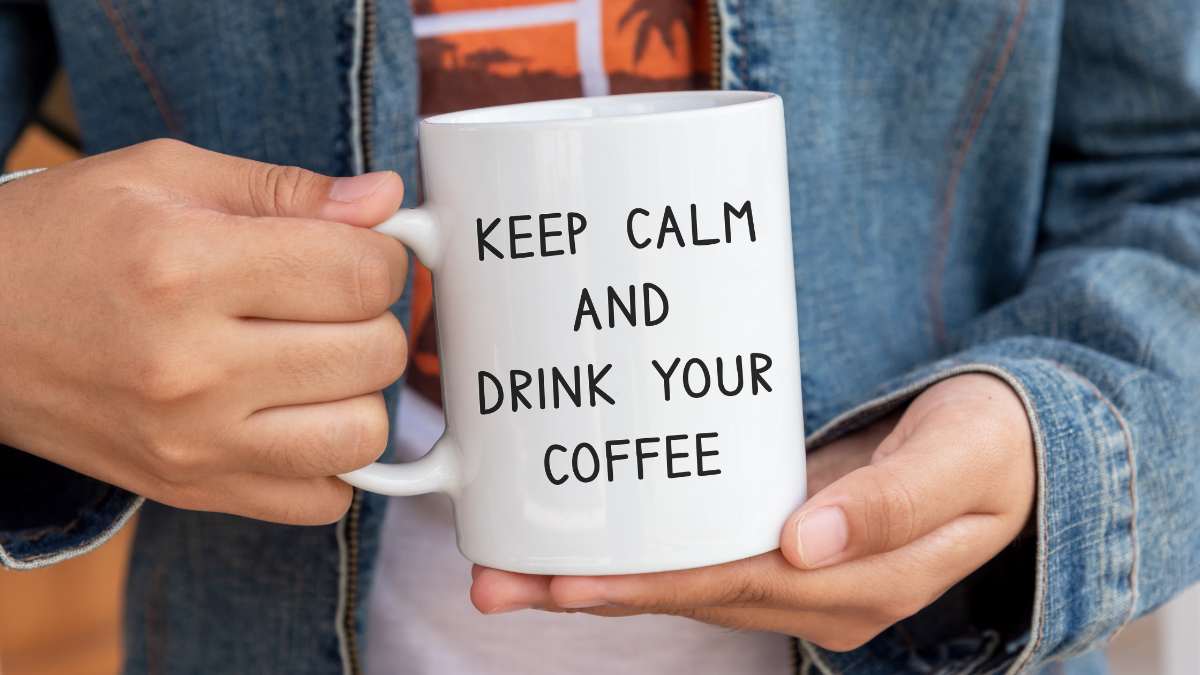 Is Coffee Good Or Bad For You?

YES! coffee is good for our body.

The only problem is the coffee consumption that we take every day. For us, coffee is the best way to start out a morning cup. It makes us do our physical performance and energy levels during our tasks.

Moderate coffee consumption should be our priority before drinking three to five cups.

If you have some health problem. Please consult your doctor. Always remember that too much to everything is risky.

We hope that you learn many things from this blog about the pros and cons of drinking your coffee! You can also check our blog about healthy recipes for coffee drinkers and coffee beans.